A Legend's Legacy: At World's Turn

"Now is no time for peace... the hands that hold this world together will come undone once again." 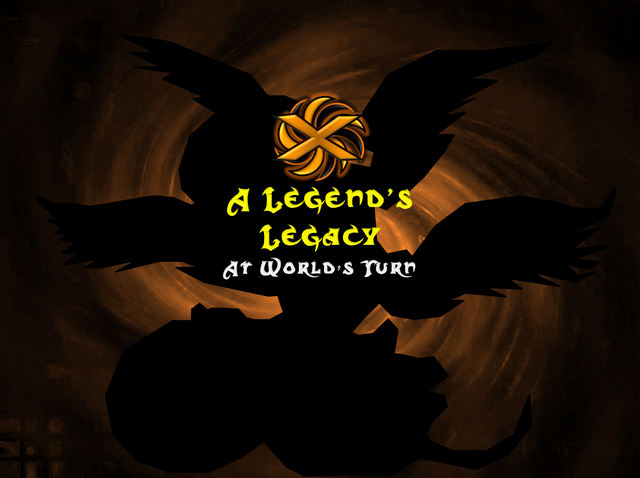 Following the defeat of Grimbane, the expansion settles on the remaining "time and space" changed as a result of the Great Turnback, and finally its conclusion and alluding to the consequences that follow. Before the Maelstrom War and the rise of Grimbane came the Ancient War, one of Outhria's most deadly conflicts, which was known for the legend of Ancieus Uredos and the mysterious Godgigum Chalice, which was known to open the Worldgate, the "prison" of the draconic titan known as Oraclos.

Some of the features in the expansion include an increase to both the level and skill cap, up to 130 respectively, and new continents made up of belts of islands and landmasses, known as The World's Edge, Drychwal, and Krom's Belt, as well as several new races, quests, and raids. For raiding specifically, there was notable upgrades to the item leveled gear one would receive themselves. Exploration-wise, there is known to be a "greater" abundance of unique mobs, and more discovery-related achievements, as during the Ancient War it was the pinnacle of explorative ability. Players, in order to explore to the fullest, gain a new skill to train - Sailing which is used in conjunction with "personal" skills such as Breeding and Construction to make ships, train crews, and engage in battles to discover these new islands which by other means aren't accessible. There are over 30 different islands - some small, uncharted, or big, that players get to access through the Sailing skill and through beating the story.

The game was released in Alpha in October 17th, 2016, being nearly two years since the release of the previous expansion.

For the individual storylines encountered in the zones, see the following below.

As the World Begins to Turn[]

After the defeat of Grimbane, the heroes of Outhria proclaimed that peace was finally a truth. However, the Golden Oculus completing their research, discover that the time-space continuum warped by the Paradox Orb during the Great Turnback reaches to the start of the Ancient War, and the world now lies on the brink of what happens next.

The Ancient War is now upon us, the ultimate competition for who shall rule the world. There were few wars that have ever rivalled it; one was the Third War between the Brotherhood and Confederacy. Ancieus Uredos, a protector of the world, finds that with the Great Turnback, some of his strength is restored, and must lead his "unstoppable army" to defeat the evils stemming from the war once again. The Godgigum Chalice, a powerful God Artifact, lies for the taking, in the hands of the Archtitan, as it has before. If time serves to be of no fault, Ancieus will undoubtedly win this war, secure the Chalice, and restore peace to the unstable power granted to Oraclos the Worldholder. However, one man, thought dead as it was before - Sinseid, has returned, having survived his previous fate of being killed by the Archtitan, and now seeks the Chalice for himself to disrupt the world's balance.

At World's Turn features characters who will play both minor and major roles in the expansion.

The expansion added two giant landmasses - The World's Edge and Drychwal. In addition, there is also a "calm belt", called Krom's Belt, containing many of the islands which are accessible through questing and Sailing. Unlike the previous expansion, the zone will start at Level 120 rather than a few levels lower to feel less immersive. Players begin by sailing either to one of the landmasses. The World's Edge and Drychwal are located at the bottom of the world, and Krom's Belt separates them. Not all of the zones are named but many have been.

Krom's Belt features the majority of the islands the player uncovers through the Sailing skill, but will be a place where future patches will set their story.

Community content is available under CC-BY-SA unless otherwise noted.
Advertisement