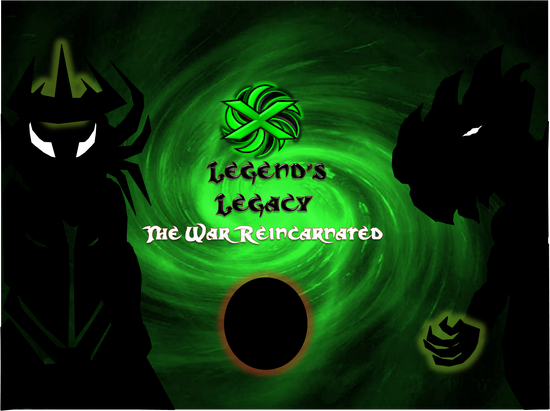 Things associated with it, such as new content will use both the cannotfindIcon.Image and this color for things such as new skills, talents, and levels.

A Legend's Legacy: The War Reincarnated, is the first expansion for A Legend's Legacy, which was first announced at LegendsCon and released. The main features of the expansion include an increase in the level cap and skill cap from 100 to 110, the addition of a new continent, and many new instances, raids, monsters, and quests to encounter. The expansion also features many "down-time" minigames, for use for players in Outhria and in the new continent.

After the events of Omegaheim in Patch X-10 in the original A Legend's Legacy, a few months later a giant rupture of time and space occurred.

Grimmok and OMNI, two of the most evil masterminds the world of Outhria has ever known, have retrieved one of the Paradox Orbs from Godvault. After losing the Maelstrom War, and failed to destroy Outhrend with their creation, Endnarok, they used the power of the Paradox Orb to reverse time and space to back to the time when the Maelstrom War happened. This change returned the continent of ? back to the world stream, and many enemies have been brought back. However, in Outhria, everything stays the same, in the other world where the continent of ? is, has not.

Players and groups must fight their way, defeating all the warlords of the Maelstrom War, and merge their defeats with Outhria's future timeline, to preserve it and prevent the world becoming a shift-lapse. The expansion will eventually end when Grimmok and OMNI use one final creation of theirs to halt the advance, while they, as an option, can be defeated.

Each character class in the game has new abilities (2-3) to level 110. In addition, they can spend more points in talents. Skills as well have ranked up to 110, but this adds a plenty to each skill, namely Crafting. Some race racial abilities have been tweaked as well.

TWR has opened doors to many new instances and raids in the expansion.

These are the new raid instances added in TWR.

So far, two minigames have been confirmed for the game.

These were confirmed by the two LL members.

The game was heavily praised upon release, mainly due to the new area and the several new raid encounters, and rich amounts of lore. As TrollGamer reviewed; "The game makes you feel as if a war is going on, almost every zone has some kind of inner conflict (with the exception of Sancturia) and deep down there is always something pulling the strings". The lore was heavily sought after, with both relations to the current war and the idea of compromising reality to go back in time. It was also interestingly loved that this event would "reset the past few events".

The final part, the raid encounters, was heavily loved and enjoyed, especially on the joint patches featuring the Rise of the Godforged and Death'kul. The former being known as a "race against time to end the war that started it all" and Death'kul being a "shadow of what it is, absolute horror". Both the raids had incredible difficulty, with the Rise having perfect direction, and Death'kul testing player's bravery. Despite there being no time limit, FailPlox critiqued that Rise really "wanted you to finish it, it's like moments and moments pass and you're closer to saving the lands". As for Death'kul, they stated that "the instance really tests your bravery, and shows you just what we can expect from the two makers, and that it has to be one of the most testing instances ever released." Some players commented on the forums that they couldn't finish Death'kul due to paranoia, and that they had to jump from the computer at some moments, and that the "maze" segment was one of the most interesting complexities in a game, and it's denizens very frightening.

The game was also praised for it's new characters such as the Leaders of the War, Deathlius Loss'end and Salvator Leonus, Sera, and the direction Tylious Dawnbane goes, with players commenting they wish to see more "duo" action with Deathlius and Tylious. At the FMMO Awards, Esquire was voted the best raid boss ever seen, commenting how the two made "inconceivable" efforts to make him extremely difficulty and hard, saying he was far above Majestic-Boss level in terms of brutality.

Box art.
Add a photo to this gallery

There will be a sequel to the game; when it comes out it is unknown.

Retrieved from "https://legendlegacy.fandom.com/wiki/A_Legend%27s_Legacy:_The_War_Reincarnated?oldid=10899"
Community content is available under CC-BY-SA unless otherwise noted.